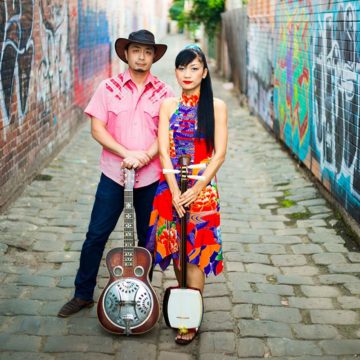 George and Noriko break all the rules. The duo brings something unique, something unexpected.

Known as the Japanese Blues Cowboy and the Tsugaru shamisen player, they have been kicking up a storm wherever they play. George’s lightning fast blues licks & growling harmonica enhanced by Noriko’s percussive sounds of the traditional shamisen (Japanese banjo) has morphed into a kind of bluegrass hard country blues with a Japanese twist.

George & Noriko’s banter & easy audience interaction makes them a popular choice with audiences. George is surrounded by a host of drum pedals, seated and thumping his lap steel guitar and alternating between vocals and harmonica, with Noriko bending into the sound with her shamisen and sharing vocal duties, they are an arresting sight and their sound is something you haven’t heard before!

George has honed his skills the hard way, by busking and playing smaller venues since moving to Melbourne, Australia in 2001. Noriko has been playing shamisen since she was 6 years old, but her ability to cross styles has meant she’s played with a very long list of blues, jazz and rock artists. Since they joined forces, the duo has won both numerous awards and critical acclaim including the Australian Busking Championship. They also performed at WOMADelaide, the National Folk Festival, Port Fairy Folk Festival and Caloundra Music Festival. On top of all this, they were also surprise finalists on Australia’s Got Talent.

Their first joint album‚ ‘EAST WEST’ was released in 2010 and received 4 stars after being reviewed by the ABC Limelight magazine.

Their second joint album, ‘HOWLIN’ SUN’ was released in 2016.