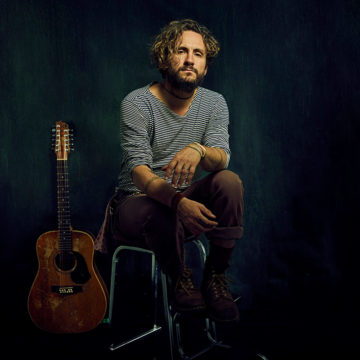 “It’s tempting to stay safe and make music that everybody likes, but that’s not a very artistic way of thinking or being – in fact, it’s kind of corporate. You have to take risks, and if you do, you’ll create your own rewards, whatever form they take” So says John Butler, the singer, songwriter and activist who is Australia’s most acclaimed and successful independent musician. “I steer my career with my heart,” says the American born guitarist who resides in remote Western Australia.

“Creativity can take many forms. For example I like to spend time in my shed making pocket knives, I paint, and climb trees, and hang out with my family. All these things can run in parallel with each other.” Along with all this he also runs his own label - Jarrah Records - with a tight team of associates and on September 28th Jarrah (through Because) finally released John Butler's seventh studio album - HOME

HOME took over four years to make and is a profound exploration of subjects close to Butler’s heart. Unlike the singer’s previous works, he created this one largely without the other members of his Trio due to the inner chaos he experienced during the writing and recording process.

“Life’s a balancing act,” he explains. “Like many people, sometimes I’m anxious and stressed, sometimes I’m not – and this time, I was smothered by broken coping mechanisms, childhood baggage and brooding existentialism. I’ve been dealing with anxiety on and off for ages. I used to think it was just a reaction to the stresses of modern life and touring, but this time, it genuinely felt like impending doom.”

“With all that noise in my head,” he continues, “it was easier to push everybody away and get the songs out without any other opinions.”

After seven studio albums and four live releases the Trio (which currently also features drummer Grant Greatly and bass player Byron Luiters) Butler had a tried-and-tested creative routine but it all fell by the wayside with HOME, as Butler explains.

“The first recording session was at my Fremantle studio, the Compound, in November 2016. I felt split between what I had always done as a member of this tight-knit Trio, and myself as an individual trying to realise a very personal vision. Grant and Byron couldn’t be any more conducive to making great music, but I needed to find the mental and emotional environment that would help bring this album to life – and for some reason, the usual way wasn’t working for me. Two other sessions, one with a different producer and the Trio, and another one on my own, highlighted the need for a new approach.”

Ultimately, it was producer Jan Skubiszewski who helped Butler bring things into focus. “It was uncharted territory,” he muses. “Between my laptop demos with their beats and synths, and Jan’s extensive experience with hip-hop, dance and band production, I was finally finding a new way of working. Then we did group percussion and some rhythm-section tracks back at the Compound before a fifth session at Jan’s Red Moon studios in rural Victoria where I finished off the basic recordings. Finally Byron and Grant came in to beef up the beats and bass, bringing what only those two fine musicians could bring, and HOME was done at last.” ​Butler clearly went through his own personal hell to create HOME but it’s not the first time he’s done things the hard way to make sure that they’re done right.

“I started playing the guitar when I was 16, and I’m 43 now,” he recalls. “I began busking instrumental songs when I was 21. As a teenager I used to write songs just for myself, so it took me a while to make my first demo tape. I remember the first person who asked me for a tape came back two or three times – and when I still didn’t have one, she walked away shaking her head. I realised at that point that I really had to get off my butt and do it.”

That first cassette sold over 3500 copies – a number that a fair few signed artists would be happy with, let alone a busker. Most of us would have stopped right there, content to jam our youth away, but Butler knuckled down to building a profile.

​“It was a gradual progression from busking to playing in bars and clubs,” he remembers. “I did gigs in the week and busked at the weekends, but as more and more gigs came along, I just wasn’t around to busk any more. I had all these songs written, so I decided to share my act with drums and bass, and formed the John Butler Trio.”

Butler’s recorded catalogue has paved the way to major success, although he’s never rested on his laurels. In the mid-2000s he set up his label plus a charitable organization – the Seed - which provides grants to artists and musicians. His involvement in a long list of environmental campaigns is as integral to Butler as his music.

“Ah, don’t get me started!” he chuckles. “I’m laughing here, because otherwise I’d have to cry. The hydraulic fracking that’s going on in Australia and the UK and USA is out of control, and completely evil. They’re messing with our water now, and I like clean water and clean air. Does that make me a fundamentalist? I don’t think so. At least the environment is a mainstream issue now, not a left-leaning concern as it used to be. Personally, I pick and choose where I can be involved, and where I can be most potent to a campaign.” ​Add Butler’s perspective and worldview to the new songs on HOME and it’s no wonder that they add up to such an immersive experience.

Summing up the album, Butler states: “What you’re hearing is the destination – but getting here felt like an odyssey; a rite of passage that I couldn’t go around, couldn’t go over, and couldn’t go under. I had to go through it.”

Asked how HOME compares to his previous work, he explains: “It’s just evolution; something I’ve been thinking about and trying to create for years. Have I mastered that moment? Probably not, but that’s the journey – you never quite master it. You’re always headed towards the horizon, but you never make it there.”

Could he have made HOME as a callow youth, back in 1990s Fremantle? “No!” he laughs. “I would have liked to, but philosophically speaking, I can only be where I am, and the journey that has led me to this point was one I had to take. I’m actually glad I didn’t try to make this album 20 years ago, because I didn’t have the maturity. After this many years I’m finishing my apprenticeship, and I’m glad it’s taken 20 years – because I think I’m just starting to get decent at this thing!”