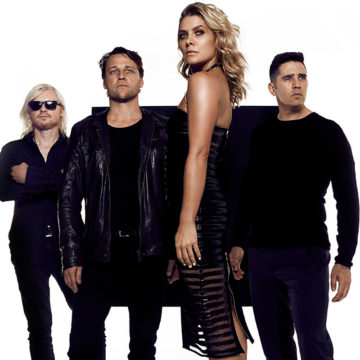 Rogue Traders are an electric, pop rock band formed in 200 by James Ash and fellow original band member Steve Davis, both Dj’s hailing from the UK in 2004 actress Natalie Bassingthwaighte joined the bands on lead vocals alongside Ash on kehs, Tim Henwood on guitar and Cameron McGlinchey on drums.

Throughout the decade, the group shot to fame achieving chart success both locally and internationally, releasing 7 top 20 hits on the ARIA Singles Chart, ‘One of My Kind’, ‘Voodoo Child’, ‘Way to Go!’,‘Watching You”, “We’re Coming Home” “Don’t you Wanna Feel” and “I Never Liked You”.

Their most successful single, ‘Voodoo Child’, peaked at number #3 on the UK Singles Chart, #4 in Australia, #7 in New Zealand and #15 on the Irish Singles Chart. In 2005 the band release their classic album, ‘Here Come the Drums’, which was certified 4 x platinum on the ARIA albums chart, in 2007 ‘Better in the Dark’ was released and certified platinum by ARIA.

Rogue Traders have sold over 1 million records worldwide and toured both nationally and internationally. The band have been nominated for 10 x ARIA Awards, 3 x MTV Awards, 1 x Nickelodeon Kids' Choice Award, 1 x Inside Film Award and 8 x APRA Awards. Winning APRA’s for ‘Way to Go’ and ‘In Love Again’ the ARIA for ‘One of a Kind’ MTV Award for ‘Voodoo Child’.

In 2015 James Ash, Natalie Bassingthwaighte, Tim Henwood and Cam McGlinchey reunited for their first live performance since 2008 and the flame has since been reignited, causing a demand for performances across the country. Whilst there is no sign of new music just yet, Rogue Traders are in better shape than ever, reprising their hits of the past decade.