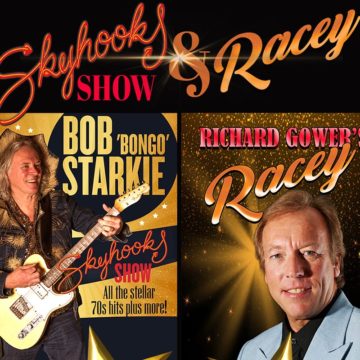 Remember the Skyhooks? Remember Racey? Of course you do!

Well, original Skyhooks member Bob 'Bongo' Starkie has teamed up with Racey's lead singer, Richard Gower, to present a show playing all of their greatest hits and a performance that is guaranteed to knock your socks off!

In the 70’s and 80’s Skyhooks (Australian) and Racey (British) shared the same stage on Countdown on numerous occasions.

Enjoying huge popularity and success, both bands topped the charts and sold millions of records.

In fact, Skyhooks have been described as "giving The Australian music industry the enema it needed" when they smashed onto the scene in their colourful costumes, wearing makeup before other bands tried it.

Don't miss this culmination of 70's brilliance and sing along to all of these classic hits including: 'Living In The 70's', 'Horror Movie' , 'Some Girls' and 'Lay Your Love On Me' just to name a few!

This is a fantastic show, with hit after hit from some heavyweight 70's legends.